"You have a magic rock? What's next, are you gonna pull out a broom and fly around on it?"

"Dude, magic isn't real, it's probably just catching light in a weird way to look like it's glowing."

"Let's make a bet then, if I can prove it's magic I can use it to do whatever I want to you."

"And when I inevitably win, you have to pay my share of the rent next month." 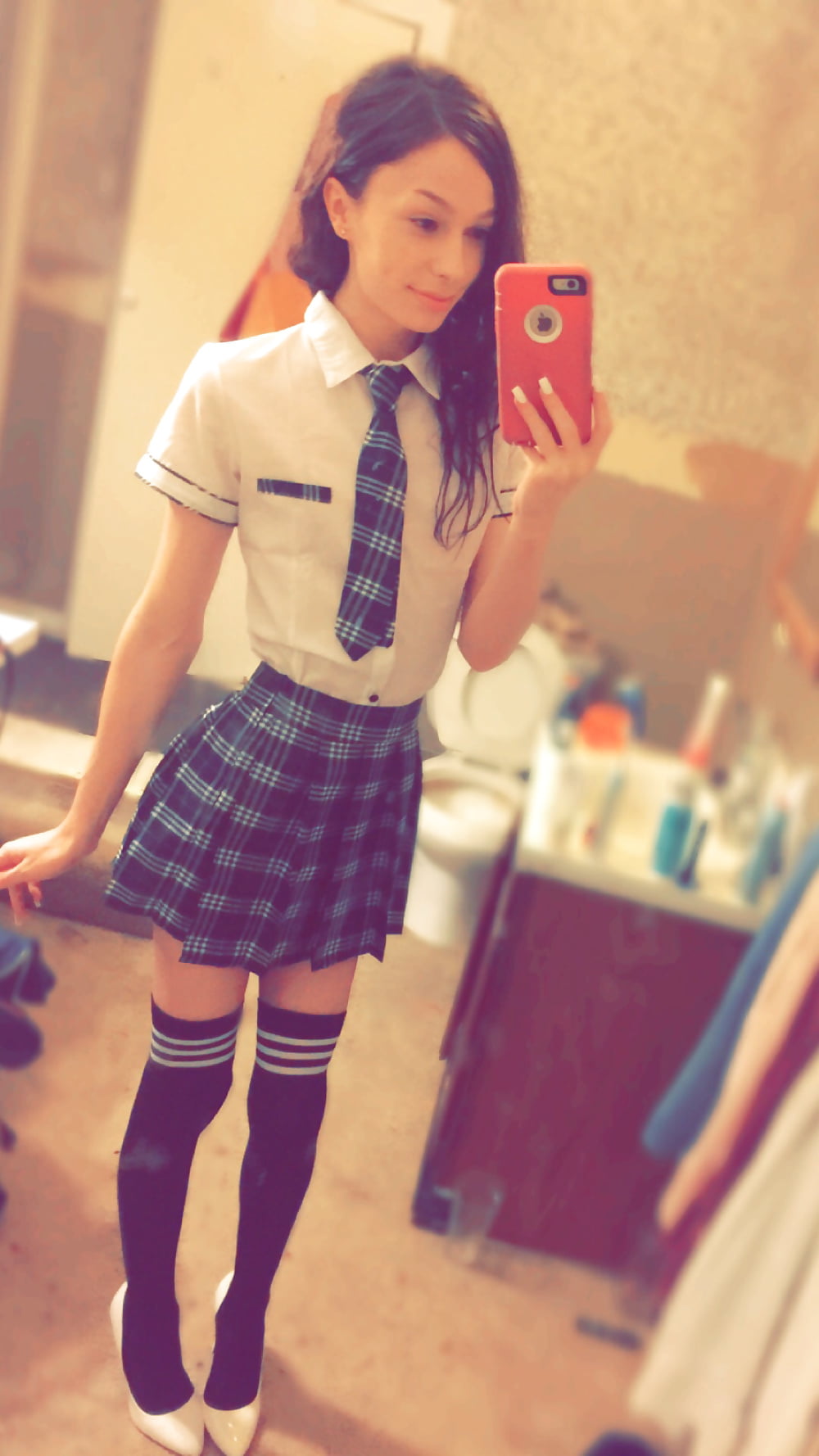 Just as soon as he said that, I had lost our little bet, within seconds I was dressed in a school girl outfit with an all over much more feminine frame.

"I told you it was magic, you should've listened."

"Change me back dude, this is crazy."

"It's simple Alexis, you've always called me a sissy and now I intend to make you my sissy."

"Come on, you know I was just teasing you man."

"Nah, I think I'll go ahead and have some fun, think of it as me teasing you. Now, why don't you go get acquainted with your your new body, maybe snap some naughty pictures."

His words were like commandments. No matter how hard I may try to resist I couldn't. I was a passenger in my own body as I made my way to the bathroom for a little photoshoot. I cycled through so many outfits that I lost count, and with each photo more degrading than the last I was losing all sense of self. I looked in the mirror and didn't see myself. I saw this. 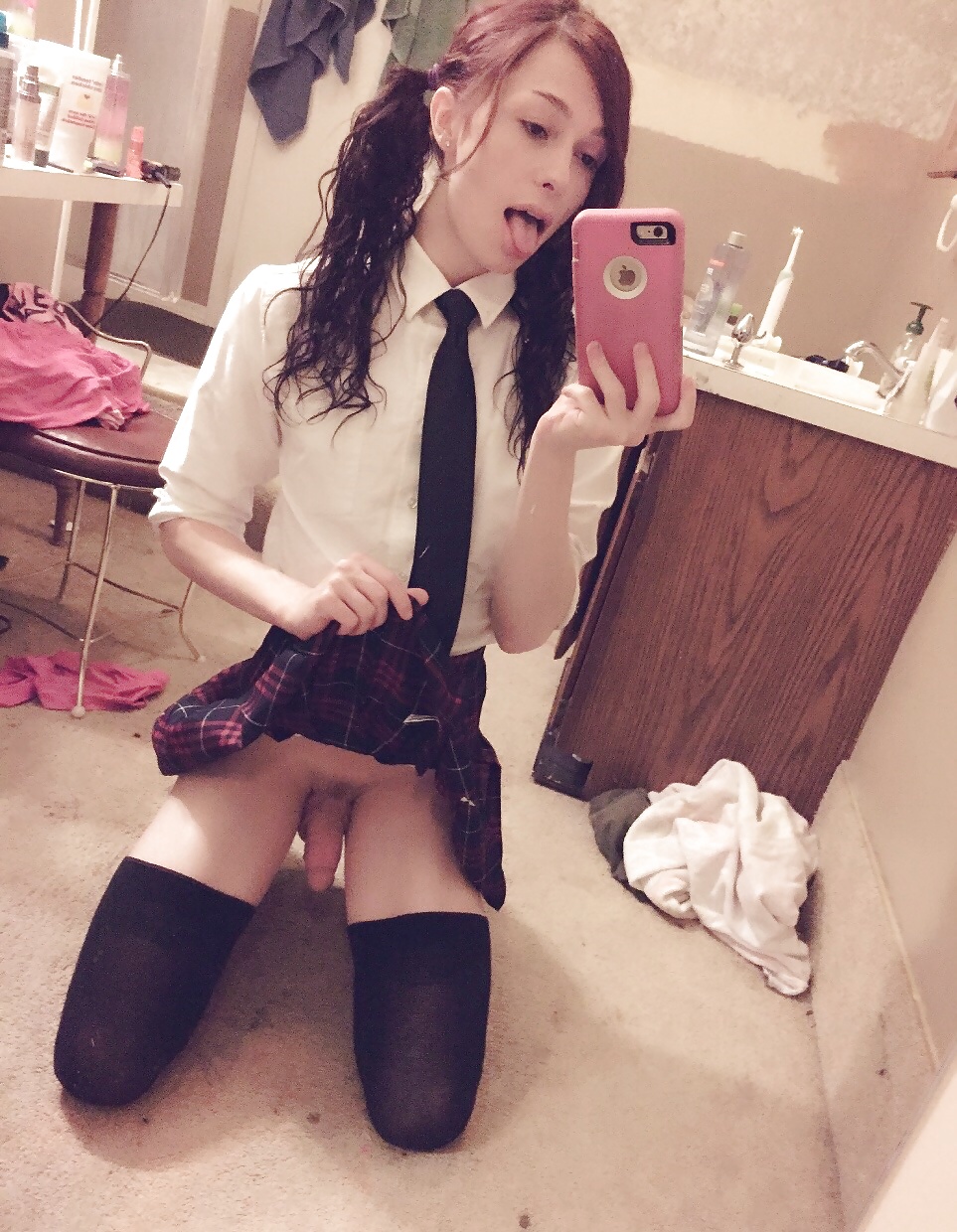 And eventually, even this. 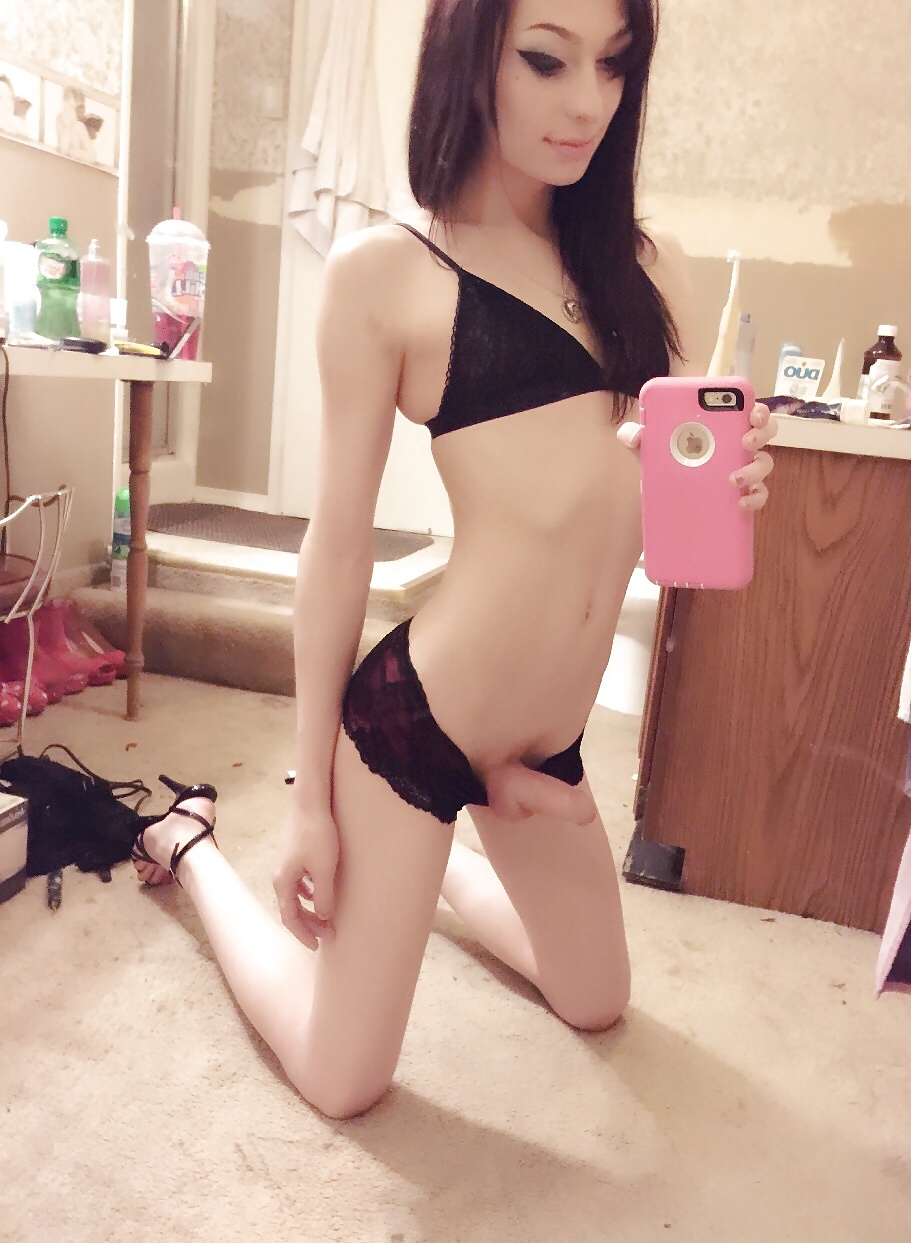 None of this scared me as much as what happened after taking that lingerie clad picture though. I could immediately tell that I wasn't leaving the bathroom to get another outfit this time. In short time I realized where my body was actually taking me. To Jack's room. After what had just happened I could only dread what was to come when I made it to his room. When I opened the door to his room my fears were confirmed. There he was, laying naked on his bed with his cock fully erect, waiting for me. My entire world flipped in that moment looking at his cock brought things into perspective. That was a cock. A glorious cock. A beautiful cock. The idea that I ever thought I had something even comparable to it was laughable to me now. No, I don't have a cock. I have a pretty little sissy clitty. With this newfound knowledge my mouth began watering like never before. My body craved that cock, I needed that cock.

When my tongue finally touched his manhood I couldn't control myself. The taste of his precum alone drove me up the wall. It was the best thing to ever grace my tongue. It was everything I had ever wanted in life. His cock was taking me to places that I could've only imagined and I could only yearn to know how it would feel inside of me. While lost in my cock induced bliss my body further changed. My chest ballooned slightly and though the majority of my body was already very effeminate after the first set of changes, one thing remained from my male form. That of course was my little clitty, though, that was no longer the case. The last shred of me that I could vaguely be considered male soon slipped away, leaving only a tight, dripping wet pussy, aching to be filled by the very cock I was currently devouring.

"Alright Alexis, I think it's time I make a woman out of you."

Hearing those words were everything to me. Sucking his cock was amazing enough but now I get to take him inside me? I get to service this amazing thing with more than just my mouth? Yes please!

He maneuvered me off the bed and somewhere along the line he must have used the stone to put me in a lace top which served to make me feel truly sexy. Outside of its effect on me it seemed to also get him more worked up, as when he slowly penetrated my delicate womanhood I could feel that he was harder than he had been when he was in my mouth. Hardness was not even close to the forefront of my mind though. I was way more focused on how deeply and fully he filled me. I had never felt anything nearly as incredible as this before. With every thrust any minuscule shred of 'maleness' I had left eroded away. Each thrust drove home just who I now was. I was his woman. I was his slut. I was here only to service his glorious cock. And when he finally exploded deep inside me everything was set in stone. I had fully accepted my new place in life, my true purpose. All I could ask for now was that he didn't have that long of a refractory period, I was already desperate for round 2.

(So, goodbye was more of a see you later I guess. When I wrote that post I truly believed that I just couldn't write a good story anymore. I had plenty of ideas that I could just not fully flesh out. Furthermore, I hadn't had the desire to write these types of stories in quite a long time. That brings us here though. 'Acceptance.' Acceptance has multiple meanings here actually. For one, I recently wrote another story that I had the drive to write out of nowhere. That story was only posted on OpenTGC and it was called 'Denial.' I'll be editing it and posting it on my other usual locations since I've now... accepted that though sometimes I'll be in a drought for story ideas I'll probably always come back at some point. I've also accepted that I can't force myself to write. I've known this for a long time but when I wasn't writing I almost felt... guilty? It makes no sense, but yeah, guilty. As if I owe it to everyone to put something out. I'm not going to do that anymore. If I'm not really into writing a story I just wont write and I wont feel bad about that anymore... hopefully. So yeah, I suppose I'm back. I hope you enjoyed reading this and I hope you enjoyed Denial aswell.)

(I wanted to explain more about Denial for those of you on OpenTGC. First off... I'm sorry I misled you a bit with it. I didn't want to post it on my normal account because I wasn't sure if that bit of inspiration was a one time thing or not. In an effort to further hide that it was me I also didn't edit it past the editing I do as I write. I of course also laid it out differently than I normally do. I wasn't sure just how distinct my writing style happened to be to readers so I did my best to change just enough so that with my misleading aside it would be unlikely that someone would realize it was me and think that I was back. Lastly, I wanted to say thank you for the support on that story, it really helped in me deciding to come back, knowing that I can actually still write good story regardless of the reputation I've built as SexyCaps. I know that's a ridiculous idea, that people only like my stories because of my account, but I've never been confident in my writing so stupid thoughts like that still worm their way into my head.)
at February 18, 2020